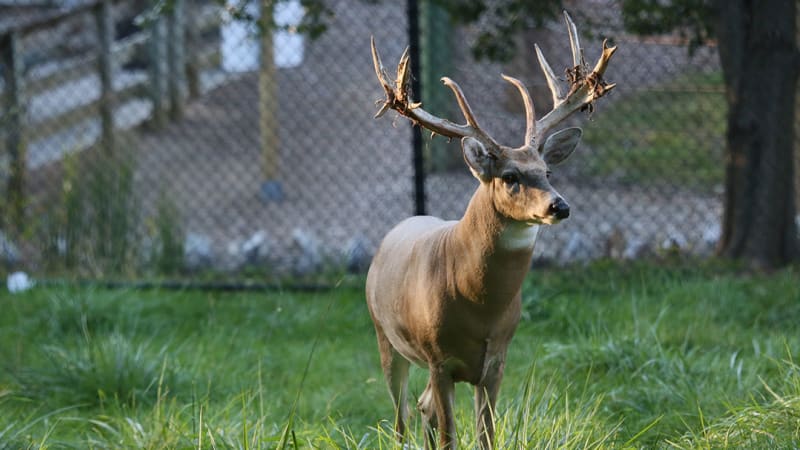 During the past century, logging and farming caused drastic changes in the forests. This created ideal habitat for the white-tailed deer, now the most common large mammal of the eastern woodlands. Along the edge where the forest meets the field, a deer has easy access to a variety of food sources and to the safe cover of the forest. The whitetail is an adaptable browser, feeding on green plants in spring and summer, and surviving on twigs, buds, and acorns in the fall and winter. Their distinctive white undertail lifts and flashes when alarmed, and serves as a danger signal to other deer in the area. In summer, the coat is comprised of short, fine reddish hair. In winter, the fur is coarser and is grayish brown. Winter hairs are hollow for insulation. The hairs grow very thickly, and for extra warmth, they can stand on end to trap air between them. The deer's senses are keen. Even when they appear to be resting, calmly chewing their cud, their ears may be turning and twisting, scanning the area for the slightest sound.In the late winter of every year, the male deer loses his antlers. A new set of antlers will begin growing very soon and will continue to grow until the full size is reached in late summer. The age of a deer can't be determined by the size of the antlers. Antler size depends on the animal's health, its age, and most importantly, on the quality of its diet. Antlers are shed yearly. In contrast, horns such as the bison's, are permanent.White-tailed deer have the most extensive range of all the North American deer species. They can be found from southern Canada, through most of the continental United States, and into Central America. In parts of the west, their range may overlap with the larger mule deer, though hybrids between the two species are rarely seen. Their natural predators, including wolves, mountain lions, and bobcats, have been much reduced over the past century. Regulated hunting and highway accidents, are now their means of population control.

ZooAmerica is home to three white-tailed deer. The buck, Johnny, was captive-born in October of 2009 at a local breeder's facility. The two does are Lilly and Laurel. Lilly was born in June of 2013. She's the smaller of the two does. Laurel was born in May of 2012 and she has a green tag in her right ear. Both females arrived at ZooAmerica in May of 2014 from a local breeder.

White-tailed deer live in a variety of habitats, including woodlands, swamps, farmlands, brushy areas, and cactus and thornbrush deserts. They prefer dense thickets for hiding and traveling about, and edges which provide food.

White-tailed deer are herbivores and feed on a variety of vegetation, depending on what is available in their habitat. In eastern forests, they browse on the buds and twigs of maple, sassafras, poplar, aspen and birch, as well as acorns and many shrubs. Conifers are eaten in the winter.

The three deer are usually always visible. If not standing and grazing on grass, they might be lying down while resting or chewing their cud.