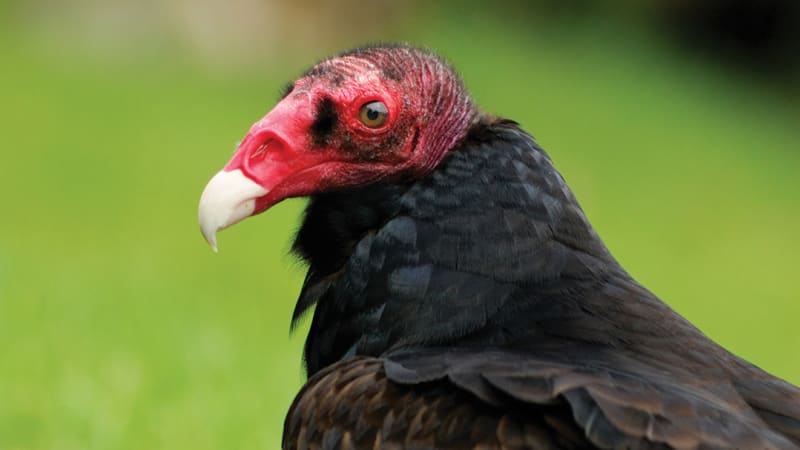 Lacking the strong grasping talons needed for killing live prey, turkey vultures eat carrion, the flesh of dead animals. Vultures spend hours soaring over the countryside, with their long wings held in a shallow "V" while tilting from side to side. Excellent eyesight and a well-developed sense of smell are used to locate carcasses on the ground. Despite an unseemly diet, these scavengers are remarkably hygienic in design. Their trademark bare heads and necks are easier than feathers to keep clean after a meal. In the morning, vultures bask in the sun with outstretched wings. The black color of their feathers absorbs sunlight, warming their bodies and killing bacteria. Turkey vultures are normally silent, but will hiss and grunt if disturbed. When threatened, they also regurgitate recently eaten food to help drive off the intruder while reducing their weight for a speedy takeoff.

They are found in southern Canada, most of the U.S. and into South America. They prefer open country near rocky or wooded areas. Breeding habitat includes remote areas inaccessible to predators, and eggs are often laid in cave entrances, hollow logs or on steep cliffs.

Turkey vultures eat almost entirely on carrion which they find largely by their excellent sense of smell. Vultures are social feeders - many might join together to feed on a large carcass.

Sometimes, the vultures rest inside the shed. At other times, they're on the porch of their shed or on the ground. On sunny mornings, they often stretch open their wings and bask in the sunshine.