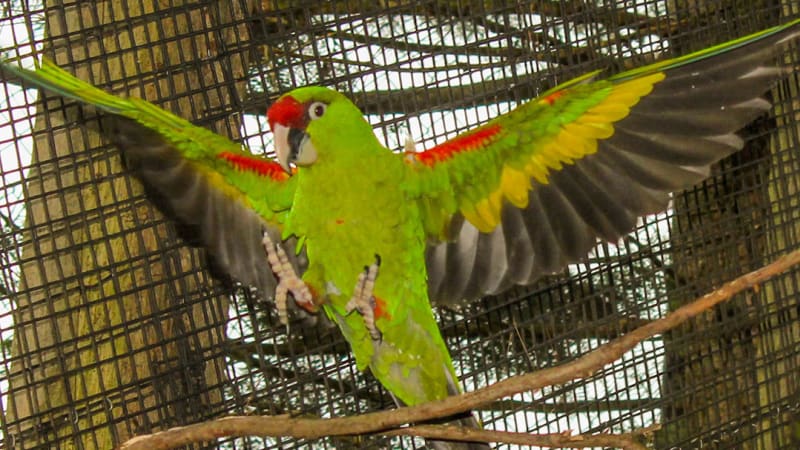 Thick-billed parrots are social birds, and live together in flocks all year. Their loud calls can be heard over a mile away. Thick-billed parrots require the specialized habitat of a mature pine-oak forest for nesting and food. These parrots build their nests in snags or old woodpecker holes which they enlarge by chewing the wood. Their thick bills shred pine cones to reach the seeds, their main source of food, but they will also crack open acorns and eat fruit. Their bright green color helps them to blend in with the pine needles. Thick-billed parrots spend most of their time at higher elevations, from 3,900 to 11,500 feet. Although their range once included the mountains of southern Arizona and New Mexico, they are now found only in the mature pine-oak forests of northwestern Mexico. Loss of suitable habitat resulted in a drastic decline in their numbers and they were listed as endangered species in 1973. Along with the now extinct Carolina parakeet, thick-billed parrots are one of only two parrot species whose natural range once included the United States.

Four thick-billed parrots reside at ZooAmerica. We have had success with thick-billed parrot breeding over the years. Eggs have hatched in 2001, 2011, 2013, 2014 and 2015. We keep the chicks until they are at least 3-5 years old. They are then sent to other zoos to breed, based on recommendations from the Species Survival Plan. In 2019, we traded parrots with other zoos to create two new breeding pairs. The goal is that they will bond and produce chicks in future years. ZooAmerica also participates in research projects to learn more about thick-billed parrots. With so few birds remaining, every bit of knowledge gained is vital to the cause of saving their species.

Thick-billed parrots spend most of their time at higher elevations, from 3,900 to 11,500 feet. Although their range once included the mountains of southern Arizona and New Mexico, they are now found only in the mature pine-oak forests of northwestern Mexico.

Their diet is mostly pine nuts, but they also eat buds, acorns, and juniper fruits. Flocks gather on a single tree and clip the cones from branches before shredding their outer coats to get to the seeds inside. At the zoo, they eat a commercial parrot food, and nuts, seeds, fruits and vegetables.

Look up! These parrots prefer to be as high as possible in their exhibit. They may be perched on the nest boxes in their exhibit or eating at one of their food stations.