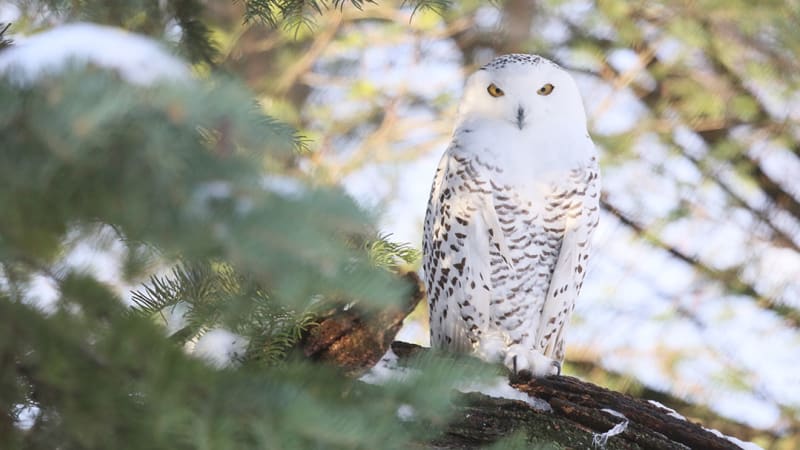 The heaviest of all North American owls, snowy owls are well adapted for life on the Arctic tundra. Very thick plumage and heavily feathered legs and feet insulate snowy owls against extremely cold temperatures. These striking owls hunt by night or day, depending on seasonal changes in Arctic daylight. Although snowy owls prey upon hares, ground squirrels and birds, small tundra rodents called lemmings are their most important food. Snowy owl breeding is closely tied to cyclic changes in lemming numbers that peak and crash at roughly four-year intervals. When lemmings are plentiful, the owls can lay up to twelve or more eggs in a clutch. Snowy owls lay fewer eggs, or none at all, if lemmings are scarce. Better camouflaged than males, the more heavily spotted females incubate eggs and brood young, while males provide the food. Nests are shallow depressions scraped in the ground, usually located on hillocks for a commanding view. Snowy owls are circumpolar, inhabiting the Arctic regions of North America and Eurasia. Winter migration is irregular. Although some snowy owls winter on the tundra, others will migrate to the open plains of southern Canada and the northern United States. Lemming population crashes and severe weather may force snowy owls to migrate as far south as Pennsylvania or beyond, in search of winter prey.

We have two snowy owls on exhibit. Our female, Rinna, hatched in captivity at Tallinn Zoo in Estonia. Her hatch date is 2007 and she arrived at ZooAmerica in 2009. Our male, Nash, arrived at ZooAmerica in March of 2019 from the Nashville Zoo. He hatched in June of 2010. Rinna is the larger owl with distinctive black barring while Nash is almost completely white in color with few black markings.

The snowy owl inhabits open tundra, from the treeline to the edge of the polar seas. They will also use coastal fields, lowland salt or freshwater meadows, marshes, and sometimes more settled areas.

Lemmings are the most important food source for snowy owls, and their breeding is tied to the cyclic changes in lemming numbers. These owls also prey upon hares, ground squirrels, ptarmigan, waterfowl, fish, and sometimes carrion.

Since snowy owls are birds of the treeless tundra, our owls spend a lot of time on the ground. Occasionally, the owls will perch in one of the trees in the exhibit.