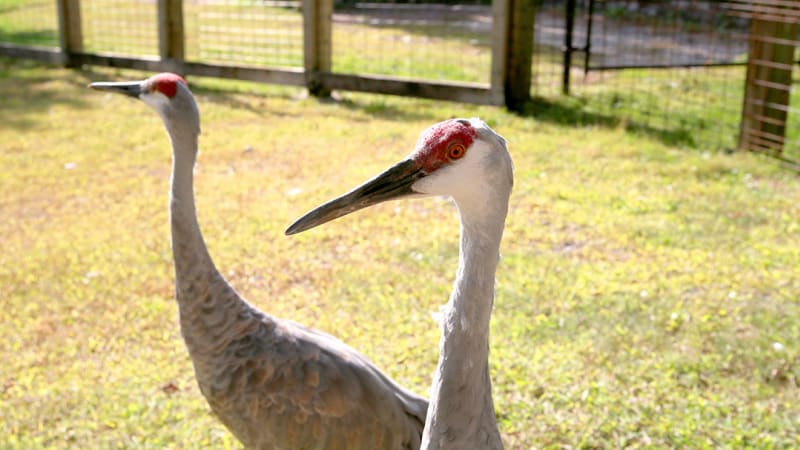 A ten million year old sandhill crane fossil was found in Nebraska. This discovery makes them the oldest known surviving bird species. These living fossils still follow their ancient migratory routes from breeding grounds in the northern prairie marshes to southern wintering areas each fall. Sandhills are the most abundant of the world's crane species and number over 600,000. They are omnivores and feed on a wide variety of plant tubers, grains, small vertebrates, and invertebrates. Cranes are often mated for life, and dancing is an important part of their courtship. Standing four feet tall, these graceful birds prefer grasslands and open fresh water wetlands.There are only two crane species in North America. The extremely endangered whooping crane is larger than the more common sandhill. Both share some of the same critical nesting marshes, migratory staging areas, and wintering grounds. What is good for the sandhill crane is also beneficial for the whooping crane. The conservation of these areas is vital to both species.

ZooAmerica has one sandhill crane in Big Sky Country. Peanut is a male and hatched July 2011. He arrived at the zoo in 2012 from a wildlife rehabilitation center in Wisconsin and was considered to be non-releaseable.

Sandhill cranes are omnivores and their diet varies by location and season. They feed on plants, seeds, grains, berries, tubers, small reptiles and amphibians, rodents, insects, and snails.

Our crane shares his home with our pronghorn. Look for both animals throughout the entire area as they both utilize every portion of their habitat.