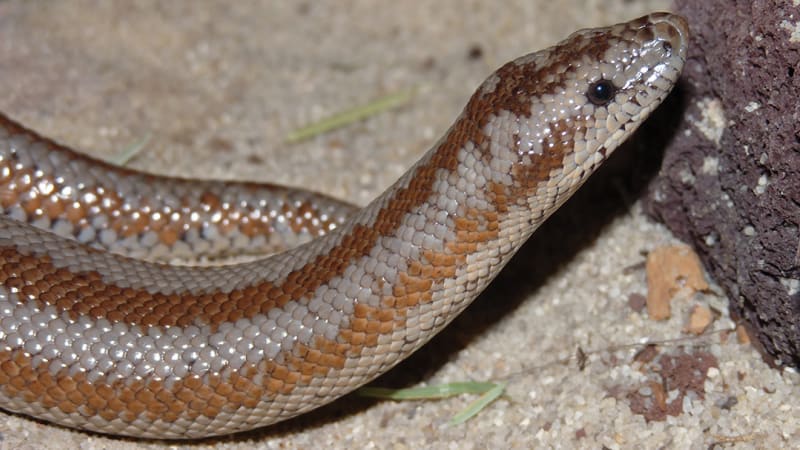 The rosy boa is one of the smallest members of the boa family, and rarely exceeds three feet in length. Like all boas, it is a powerful constrictor and has a thick body, small head, and vertical pupils. To protect itself, a rosy boa rolls up into a ball with its head in the center and its blunt tail sticking out. This fools a predator into attacking the tail and not the more vital head or body. As a second line of defense, the boa releases a foul-smelling musk from glands near the base of its tail.They are secretive burrowing snakes, and spend the majority of time hidden beneath rocks and in crevices in the desert foothills.

Our rosy boa is a male and was captive-born in 2008, but not at ZooAmerica. When fed, he strikes at the offered mouse and constricts it, even though the mice are not alive.

Rosy boas are restricted to southern California, southwestern Arizona, and northwestern Mexico. They prefer desert foothills and a rocky terrain, and spend the majority of their time hidden beneath rocks and in crevices.

Rosy boas are carnivorous. They are powerful constrictors and prey upon rodents, lizards, and birds.

Our rosy boa often hangs out high on a branch. They are very good climbers!