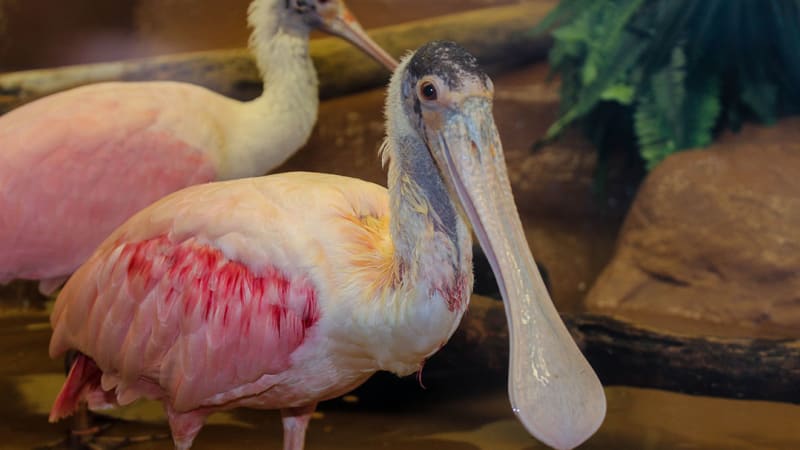 From a distance, a spoonbill might be confused with a flamingo due to its pink color. Upon closer inspection, the spoonbill is very distinct in appearance. It differs from the flamingo by its flat spoon-shaped bill, pale green featherless head, shorter neck, and pink legs. While feeding, a spoonbill wades through shallow water, sweeping its sensitive, half-open bill from side to side in the water or mud and snapping it shut when it touches its food. Typical food includes minnows and killifish, crustaceans, mollusks, aquatic insects, and occasionally plants. Special pigments in the food give spoonbills their spectacular colors. During the late 1800s, roseate spoonbill numbers declined when hunters killed the birds and collected their feathers for the fashion industry. Their plumes were used in hats, and their wings were sold as fans. Protection efforts helped the birds to reestablish nesting colonies and their population has since recovered.

There are three spoonbills at ZooAmerica - one male and two females. The male (yellow band right leg) hatched at the Palm Beach Zoo in April 2007 and arrived at ZooAmerica in November 2016. Both female spoonbills hatched at the Jacksonville Zoo and Gardens in Florida. One (yellow band right leg and silver band left leg) has a hatch date of June 2012, and the second female (silver band right leg and yellow band left leg) hatched in June 2015. Try to find all three birds and identify them by their leg bands!

Roseate spoonbills live in colonies on the coasts of Texas, Louisiana and southern Florida. They feed in both fresh and saltwater wetlands of marshes, swamps, ponds, and rivers. Theyre also found in Mexico, Central America, South America, and across the West Indies and Great Antilles.

If they are not wading in the water, look up and check out the branches in the exhibit. Even with those long toes and long legs, they are quite good at perching in the trees.