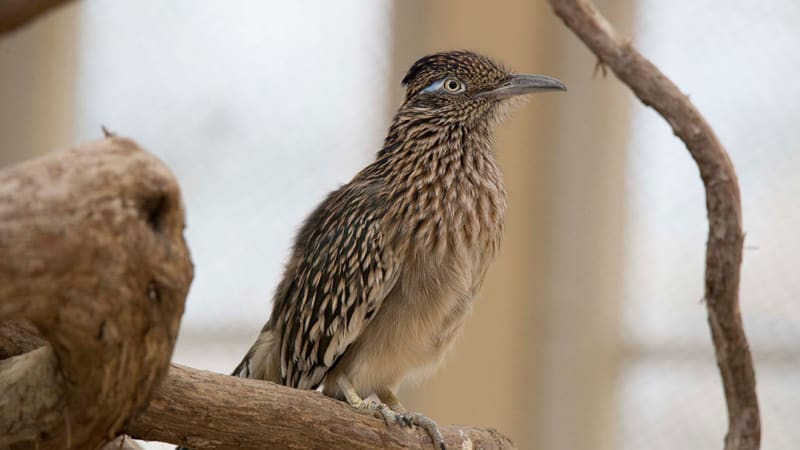 Roadrunners are long, slender birds with long expressive tails, shaggy crests and strong legs for running. These birds are known for their swift and characteristic style of running (up to 15 mph for short distances). They seldom fly and are primarily a ground bird. In the wild these birds eat insects, spiders, small birds and mammals, lizards and snakes, which they seize with their long pointed bills. Larger prey is killed by dashing it to the ground and reducing it to an easily swallowed pulp by repeated pounding.Courtship begins with the male offering the female food, but it is not given until after mating occurs. The female builds the nest from twigs which she weaves into a shallow basket in low vegetation. A clutch of eggs consists of 3-6 eggs that are incubated by both parents for 17-18 days. The chicks leave the nest when 3 weeks old.

We have two roadrunners on exhibit in the desert garden of the Great Southwest building. Amarilla is the female and she hatched at ZooAmerica in May 2011. Dash is the male and he hatched in May 2017 at the Hutchinson Zoo in Hutchinson, Kansas. Both roadrunners are able to fly. On very quiet days, they will occasionally visit the public area in the lobby. When a visitor walks in, they usually dart back to the garden.

Roadrunners prefer dry open habitat with scattered brush. They range throughout the southwestern United States and into central Mexico.

These birds eat insects, spiders, small birds and mammals, lizards and snakes, which they seize with their long pointed bills.

Our roadrunners are typically running around and easy to spot. Be patient and look all over the Garden! If it's early in the morning, they might be basking in the sunshine. If it is late in the day, they may be roosting in a tree in preparation for nightfall.