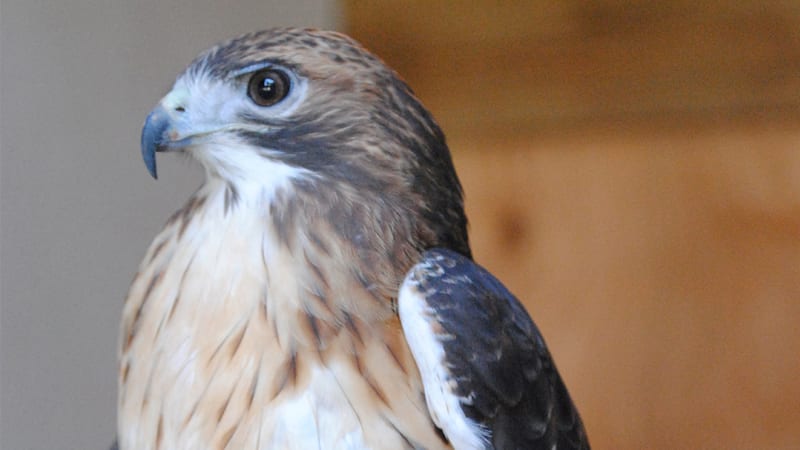 Preferring to hunt the open lands, this diurnal bird of prey will soar over fields or perch patiently on nearby trees. Using its extraordinary eyesight, the hawk locates unsuspecting prey like field mice and rabbits. An adult red-tailed hawk has very distinctive field marks, with a wide, reddish upper tail, broad wings for soaring, and a dark belly band on a white chest. Like most raptors, the red-tail will mate for life, often returning annually to the same nesting area. The nest is usually located near a woodland edge, which provides cover for the nest, while keeping close access to preferred hunting grounds.

Our red-tailed hawk habitat houses one adult hawk. Pee-wee has been our resident male since April of 2003. He was a wild bird that hatched in the city of Harrisburg in 2002, suffered a wing injury, and was deemed non-releasable by a local wildlife rehabilitator.

One of the most common North American raptors, red-tailed hawks inhabit a wide variety of open country. Where trees are lacking, they may roost and nest on tall cacti, cliffs, and similar elevated sites. They're found throughout most of North and Central America, but not in the arctic tundra.

Red-tails have a diet which varies with location and season. They hunt for many types of small mammals, including voles, rats, mice, rabbits, and ground squirrels. Reptiles, invertebrates, amphibians, and sometimes carrion, make up the remainder of their food.

The hawk likes to perch on the large tree in his habitat, often on the highest branches.