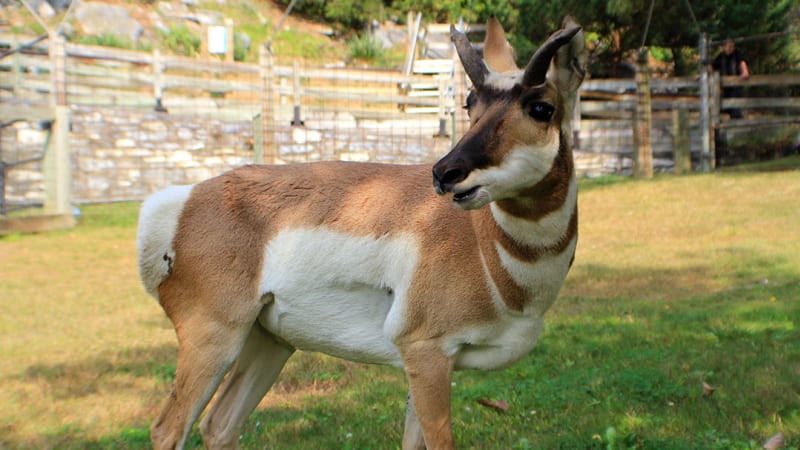 Built for speed, the pronghorn is the fastest land animal in North America and is second only to the cheetah worldwide. It can sprint close to 60 mph for short distances and cruise at 40 mph for miles at a time. Large protruding eyes provide a wide field of vision for keen eyesight. If danger is spotted, a pronghorn raises its white rump hairs and releases an alarm scent to signal the herd to flee. Although bucks and does both have horns, the male's are longer and have a forward-facing prong, giving the species its name. Unlike all other horned animals that keep their horns, the pronghorn's outer horn sheaths are shed and regrown yearly. Some pronghorn herds undertake seasonal migrations, traveling 150 miles between their summer and winter feeding grounds, in search of grasses, sagebrush, and other prairie plants. Found only in North America, the pronghorns range stretches from the southern Canadian Prairies through the western United States to northern Mexico. Once numbering in the millions, by the 1920s the number had dropped to less than 20,000. Through conservation efforts, populations have increased and are now stable within most of their range, with the exception of the endangered Sonoran and Peninsular subspecies.

We have one pronghorn on exhibit. He is extremely tame, sometimes even running to greet the keepers when they see him getting close to the exhibit. Callum is our buck and was born at ZooAmerica on June 5, 2018. He was handraised which keeps him calmer and more comfortable interacting with humans.

Pronghorn are herbivores and eat leaves, grasses, cacti, stems, and shrubs, Sagebrush is an especially important part of their diet, especially in the winter.