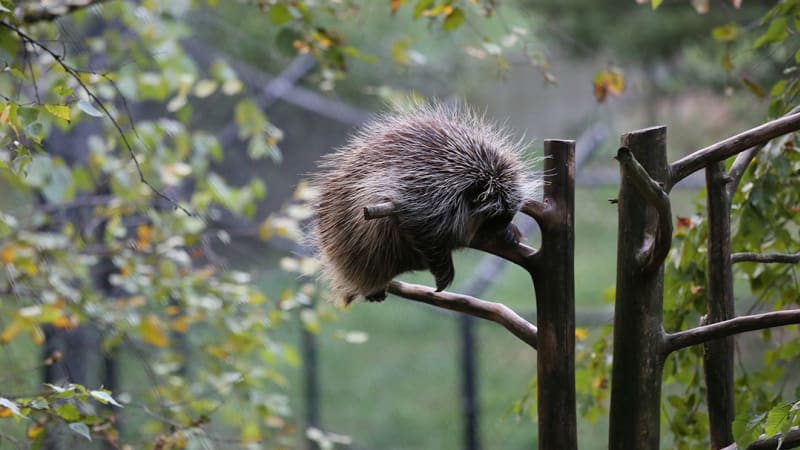 Best known for its unique and effective method of defense, the porcupine is a slow-moving, nocturnal rodent. They have no need to be quick, like their smaller relatives, since their long, barbed quills keep almost all predators away. About 30,000 quills cover the animal's body, from the crown of its head to the tip of its tail. When threatened by an enemy, the porcupine turns its back, tucks its head, chatters its teeth, and raises its quills. A porcupine cannot "shoot" its quills, but a strong flick of the tail can drive them into an attacker. The quills detach easily and the barbed tips become embedded on contact. Using its large orange incisors, the porcupine gnaws on the inner bark of trees, evergreen needles, and twigs in the winter, and a wider variety of vegetation in the warmer months. Unlike most rodents, a porcupine gives birth to only one baby annually. The pup is well-developed and is born with its eyes open. Fully furred at birth, the newborn's quills are soft and hairlike, but become hard and functional as they quickly dry.

We have two porcupines on exhibit. Carmine, a male, was captive-born on May 13, 2013. We received him from the Queens Zoo in July 2015. The female, Juniper, was born in captivity in the summer of 2016 and arrived at ZooAmerica in June of 2018. Juniper is darker in color and slightly smaller in size compared to Carmine.

The North American porcupine is found in a variety of habitats in the western and northeastern United States, and throughout Canada and Alaska. Typical den sites include rock crevices, caves, hollow logs and trees. A pile of droppings at the entrance readily identifies an active porcupine den.

Porcupines eat a wide variety of plant material and their diet changes with the seasons. In winter, they gnaw on the inner bark of trees, evergreen needles, and twigs. During the spring and summer, they shift to eating berries, seeds, grasses, leaves, roots, and stems.

Porcupines are excellent climbers. Our male porcupine is often near the top of the tree in the exhibit. If not immediately seen, look for the female in one of the dens. You should be able to see some quills!