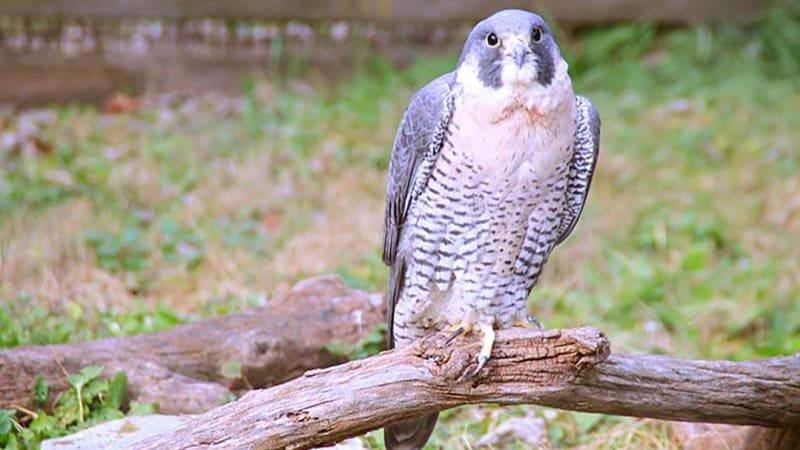 With long, pointed wings, powerful flight muscles, and rapid wing beats, a peregrine falcon is a swift and agile predator that often captures its prey in mid-air. Feeding primarily on birds, a peregrine flies high above its intended prey, makes a few rapid wing beats to gain momentum, partly folds its wings and dives or stoops towards its prey, approaching speeds of 200 mph. Prey ranges in size from a duck to a songbird, and is often killed by the impact alone. A peregrine falcon exists at the top of a long food chain and is an excellent environmental indicator. In the late 1940s, DDT and similar pesticides started to be used to control insects. DDT was a pesticide that traveled through the food chain. By eating birds that had eaten contaminated seeds or insects, a peregrine accumulated high concentrations of the pesticide in its own body. This pesticide caused eggshell thinning that resulted in egg breakage and reproductive failure. By the 1960's, peregrine falcon numbers had declined severely in the eastern United States and were critically endangered in other parts of North America. In 1970, the peregrine falcon was officially listed as endangered. Federal protection under the Endangered Species Act and the banning of DDT in 1972 helped to slowly reestablish peregrines in much of their former range. The extraordinary partnership efforts of the Fish and Wildlife Service, state wildlife agencies, universities, private ornithological groups and falcon enthusiasts accelerated the pace of recovery. Through their cooperative efforts, captive breeding programs were initiated. The release of captive-raised young and the protection of nest sites proved to be very important in the peregrines successful recovery. The peregrine falcon was removed from the federal Endangered Species list in 1999.Peregrine falcons traditionally nested on the ledges of cliffs, and still do in many areas. Currently, many of the reintroduced peregrines are nesting in urban settings, including tall buildings and under high bridges. Large populations of pigeons and other city birds provide food for these urban falcons.The name peregrine means wanderer or traveler, and indeed, the peregrine falcon has one of the most extensive natural distribution of any bird in the world. Breeding populations of various subspecies occur on every continent except Antarctica. Peregrines that breed farthest north migrate farthest south. For example, peregrines that nest in the Arctic may migrate to South America, while falcons nesting in lower latitudes may not migrate at all.

ZooAmerica exhibits one peregrine falcon, Flappy. She injured her left elbow while in the wilds of Nebraska and was taken to the Raptor Recovery wildlife rehabilitation center where she was deemed non-releasable. She was estimated to be 3 years of age when she arrived at ZooAmerica in August of 2018.

Prefer open habitats, such as grasslands, deserts, seashores, mangroves, wetlands, tundra, scrubland, craggy mountains, and cities. Often found near water, they choose areas with good nesting habitat and abundant prey. They nest on cliffs in wild areas, and on building ledges or bridges in cities.

Peregrine falcons prey mainly on birds, including a variety of shorebirds, waterfowl, pigeons, and songbirds. They are known to take prey as large as a goose and as small as a hummingbird. They occasionally hunt reptiles, rodents, rabbits, and bats.

You can look for Flappy on higher perches in the middle portion of the exhibit.