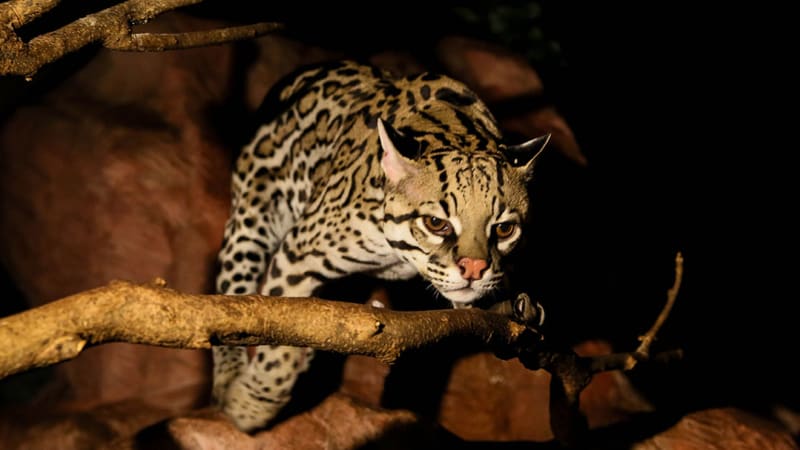 Twice the size of an average house cat, the ocelot is a sleek animal with a gorgeous dappled coat. Shy and elusive, their spotted coats make them very well camouflaged for blending into their surroundings, and they seem to mysteriously disappear into the shadows of their dense habitat. These largely nocturnal cats use keen eyesight and hearing to hunt rabbits, rodents, snakes, fish and frogs, young deer and peccaries, iguanas and other lizards. Although Ocelots pursue prey primarily on the ground, they will occasionally take to the trees and stalk monkeys or birds. Like other cats, ocelots are carnivores and are adapted for eating meat. They have pointed fangs used to deliver a killing bite, and sharp back teeth that can tear food like scissors. Ocelots do not have teeth appropriate for chewing, so they tear their food to pieces and swallow it whole. Their raspy tongues can clean a bone of every last tasty morsel. The ocelot in the United States once occurred in southern Arizona, throughout much of Texas, and as far north as Arkansas and Louisiana. As a result of habitat loss and fragmentation, road mortality and population isolation, the ocelot population in the U.S. has declined dramatically. In the U.S., they are found only in southern Texas (primarily the Laguna Atascosa Wildlife Refuge); and it is estimated that there are less than 40 individuals left in that state. The ocelot is at high risk of extinction in the U.S. They were listed as endangered species in 1982. Ocelots are protected in the United States and most other countries where they live. Ocelots are known to inhabit a variety of different types of habitats. These range from the dense thorn scrub of the Rio Grande Valley in Texas to the tropical forests of South America. Ocelots are also known to live in the mountainous regions of Central America and the Andes. Their main requirement seems to be the presence of dense cover. Throughout their entire range, the main threats to ocelot populations are habitat loss and fragmentation, hunting for their beautiful fur, predator control and collisions with vehicles.

We have two ocelots on exhibit at ZooAmerica. Santo was born on April 8, 2009. He arrived at ZooAmerica in May 2010 from the San Francisco Zoo. Ozzy came from Mesker Park Zoo. He was born on April 18, 2000, at another institution. He's been at the Carnivore Conservation Trust, Moody Gardens, Dallas Zoo, and the Greenville Zoo.

Ocelots require dense cover that is found in a variety of habitats, including thorn scrub, coastal marshes, mangrove, and tropical forests. In the U.S., the endangered ocelot is now only found in southern Texas. Ocelot numbers are higher in Mexico, Central America, and south into northern Argentina.

Ocelots are carnivorous and hunt rabbits, rodents, snakes, fish and frogs, young deer and peccaries, iguanas and other lizards. Although Ocelots pursue prey primarily on the ground, they will occasionally take to the trees and stalk monkeys.

Ozzy likes to sit on the rock near the exhibit sign. Santo prefers the right side of the exhibit, often on the back ledge. We switch our ocelots throughout the day and they are never on exhibit at the same time. The cats sometimes have access to their private tunnels. By nature, ocelots are very shy animals and rarely seen in the wild. To suit this natural behavior, we give them the opportunity to take a break from visitors if necessary.