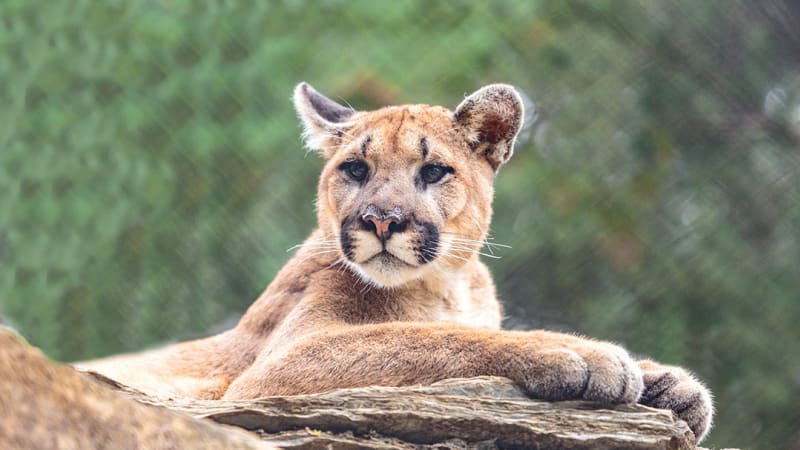 Also known as a cougar, puma, panther, catamount, painter or mountain lion, this cat is recognized by its large size, uniform tan color, and long tail. Of the New World cats, the mountain lion is second only to the jaguar in size, and typically weighs between 100 and 150 lbs. The solitary mountain lion stalks its prey and then surprises and takes it with a short burst of speed and a powerful leap. Though rarely seen, the mountain lion may cover twenty miles a night while hunting for deer and other animals. This secretive cat leaves little sign of its presence, other than its clawless four-inch tracks.

ZooAmerica is home to one mountain lion. Rainier is a male and was born in the wild in August 2014. He was found orphaned on a porch in Kettle Falls in northeastern Washington state. His mother or den couldn't be found. He was taken to a veterinarian and rehab center, but couldn't return to the wild. Upon arrival at our zoo at four weeks of age, he weighed 4 pounds. He weighed 82 pounds when placed in the exhibit in April 2015.

Once found across North America, the mountain lion now ranges from the Yukon, throughout the western U.S, and into South America. It still has a greater geographical range than any other New World mammal, partly because its adaptable to a variety of habitats, from forests to deserts and jungles.

Mountain lions are carnivores and a large percentage of their diet consists of deer. Depending on their location and seasonal abundance, they also eat elk, raccoons, rabbits, snowshoe hares. peccaries, beavers, birds, rodents, and even porcupines, among other animals.