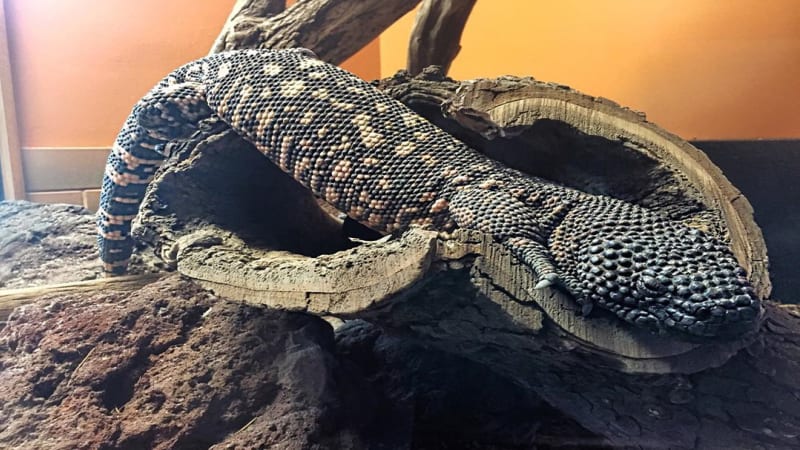 The horrible one! These lizards are venomous! When threatened, beaded lizards hiss and open their mouths, giving them a fearsome appearance. Historically, they were thought to be dangerous. In reality, these slow-moving lizards only bite if provoked. Human bites are very rare and usually not life-threatening. Modern medicine has benefited from these fearsome lizards, and their venom is used in medications for diabetes. These lizards can reach three feet in length. They search for food on the ground, as well as in trees. Using their thick forked tongues to locate nests, they eat the eggs and nestlings of birds, snakes, lizards, rabbits and rodents. Mexican beaded lizards and gila monsters are the only venomous lizards in the world and share many characteristics. Both have bony studs called osteoderms over their upper bodies, giving them a beaded appearance. Venom is produced from glands in the lower jaw and is used for defense against predators. The venom travels along grooved teeth and is chewed into the wound of the would-be attacker.

Our two beaded lizards hatched at the San Antonio Zoological Gardens and Aquarium in Texas in 2007. Each will eventually be 3 feet long and weigh up to 6 pounds. Currently, they are both between 3-5 lbs. The lizard with more speckles is Eros- named for his heart-shaped yellow markings on his back. The other lizard is named Delilah.

Beaded lizards are found in the tropical dry forest habitats of western Mexico.

Beaded lizards are carnivorous and eat eggs, snakes, lizards, rabbits, rodents, and the nestlings of birds.

These lizards are often lying in the sunshine or in their hollow log. Their size makes it fairly easy to spot them.