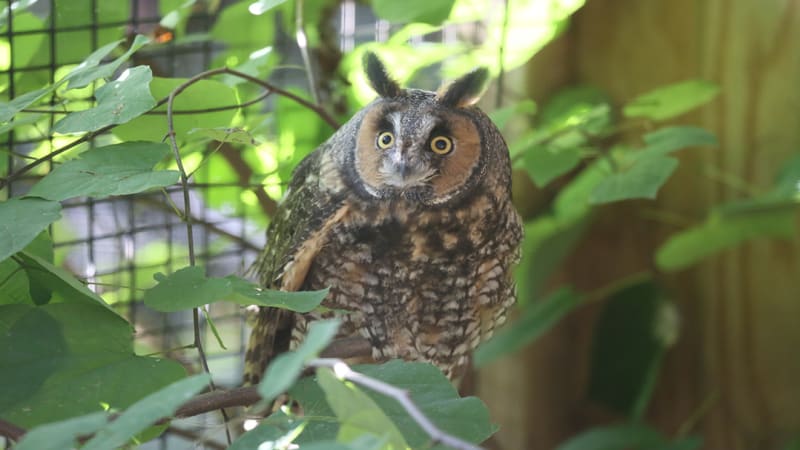 Rodents beware! The conspicuous ear tufts of the long-eared owl are not for hearing, but help it blend in with tree branches when roosting. Its true ears are hidden under the feathers at the edge of the facial disc, which channels sound into the ears. For additional camouflage, the owl may elongate its body to mimic a dead tree limb, and its plumage matches tree bark very well. This nocturnal mouser has fuzzy wing feathers for silent flight. Sophisticated hearing and powerful black and white vision are used to locate prey by sound and sight. Long-eared owls inhabit parts of North America, Europe, Asia and Africa. In North America, they prefer mixed coniferous forests, where they lay their eggs in abandoned crow, hawk, magpie, and squirrel nests.

ZooAmerica is home to one long-eared owl. This owl hatched in the wild and suffered an injury as an adult bird. After being rescued and taken to a wildlife rehabilitation center, it was determined that the owl was not able to be released back into the wild. Since it was a wild bird, we do not know its age, although it did arrive at ZooAmerica in 2007.

These owls require a combination of grassland or other open country for hunting, and dense shrubs or trees for nesting and roosting. They inhabit a wide variety of habitats, including forests with meadows, groves of conifers or deciduous trees in the prairies, or streamside groves in the desert.

The owl is typically perched on the dead tree snag in the corner of the habitat.