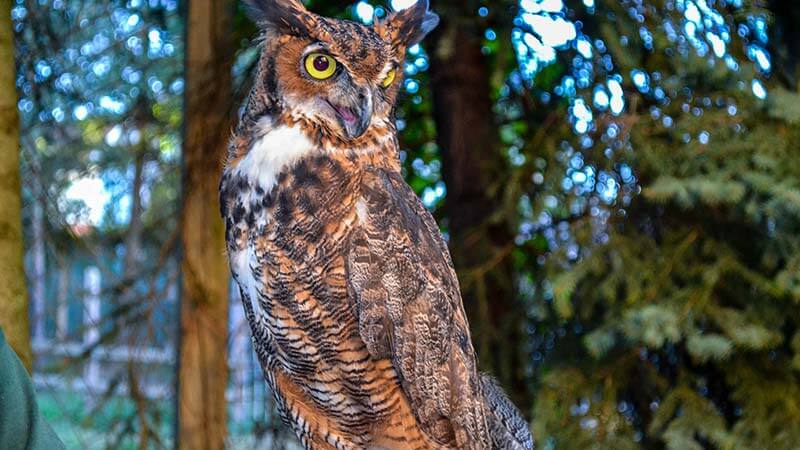 Using powerful feet and long sharp talons, a great horned owl preys upon a wide variety of animals. This hunter uses excellent vision and hearing to locate prey as small as an insect to as large as a raccoon. A great horned owl is one of the only birds of prey that will regularly eat skunks. Field marks for identifying the owl are its large size and erect ear tufts, the yellow eyes and white throat patch. The familiar hooting of a great horned owl signals its presence and can be heard for several miles. A great horned owl is an early nester. In January or February, two to three eggs are laid in old red-tailed hawk, crow or squirrel nests.Great horned owls are widely distributed throughout North America. They are adaptable owls and can thrive in a variety of habitats, including forests, desert canyons, marshes, city parks and suburban woodlands. They are the largest resident owls in Pennsylvania.

ZooAmerica exhibits one great horned owl, Echo. We received him from a wildlife rehabilitation center in Virginia. Due to his injuries when he was a wild bird, Echo has limited flight ability and was considered to be non-releasable.

Echo is always visible and may be viewed on one of the lower branches.