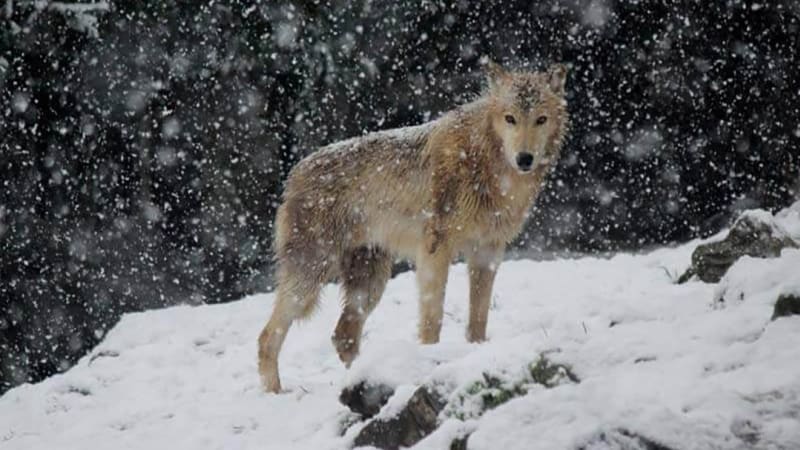 Gray wolves are social animals, living together in tightly organized packs. Packs are typically family groups, and consist of a dominant breeding pair, their pups, and young adults from previous litters. The dominant pair directs the pack's traveling, hunting, resting, and breeding. Although only the dominant pair normally breeds, all pack members help raise the litter of four to six pups. Wolves communicate by using body postures, facial expressions, scent marking, and vocalizations. Their distinctive howling can be heard for up to six miles, and helps assemble the group and advertise its territory. Often traveling long distances, wolves can maintain a steady pace of about 5 mph. They can approach 40 mph in short bursts of speed when chasing prey. Cooperative hunting enables a wolf pack to effectively take large hoofed animals, like deer, moose, and caribou. Though known as gray wolves, fur color can range from white to shades of gray, brown and black. Wolves were once the most widely distributed mammal in the world, and occupied almost every habitat in the Northern Hemisphere, including those of North America. Although stable populations survived in Canada and Alaska, large-scale predator control programs and loss of habitat and prey virtually eliminated gray wolves from the continental United States by the mid-1900s. Federal protection, successful reintroduction efforts and natural recolonization have resulted in the slow recovery of wolf populations in select portions of the Rocky Mountains, the southwest and the western Great Lakes region. The gray wolf is federally designated as threatened in Minnesota and endangered in the remaining lower 48 states and Mexico.

There are three wolves in our pack. Our male wolf, Twister, was born on April 30, 2015, at Omaha's Henry Doorly Zoo and Aquarium. His fur is lighter in coloration. The females, Hazel and Freya, arrived from Bear Country USA in Rapid City, South Dakota. Their birthdate is April 4, 2019. Our females are sisters and are easy to identify by their darker fur.

The gray wolf lives in a diverse range of habitats, including tundra, mountainous terrain, woodlands, grasslands, and deserts. Wolves require large areas capable of supporting stable populations of their prey.

Gray wolves are carnivores. Their diet includes large hoofed mammals, like elk, deer, bison, moose, and caribous. Beavers, rabbits, and other smaller animals are also eaten. They will scavenge and eat carrion.

On hot summer days, look up on the hillside on the right of the exhibit. Our wolves are well-camouflaged and you might mistake a wolf for a rock! They are much more active in cooler temperatures.