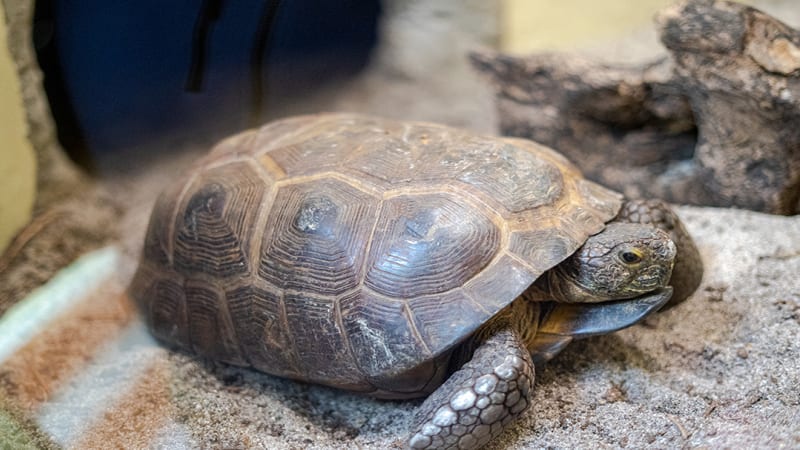 A gopher tortoise uses its powerful front legs to dig burrows that average about 15 feet long and 6 feet deep. Burrows have a fairly constant temperature and humidity throughout the year and provide protection from extreme heat and cold, drought, wildfires, and predators. A gopher tortoise typically uses several burrows during the active part of the year, but chooses one for over-wintering. Tortoise burrows are an important part of the local ecosystem and provide shelter for over 250 species of animals.Five to nine eggs are laid in a sandy mound very close to the burrow. The eggs, as well as the hatchlings, are often prey for raccoons and other predators. A gopher tortoise is herbivorous, and forages for grasses, leaves, and wild fruit during the day. Gopher tortoises are found in sandy coastal plain regions from South Carolina, all of Florida, to eastern Louisiana. Habitat loss is the greatest threat to gopher tortoises and their numbers are declining. Gopher tortoises are listed as a federally threatened species in parts of their range.

This male tortoise arrived in 1994 from a zoo in New Jersey.

Gopher tortoises are found in a variety of habitats in the sandy coastal plain regions from South Carolina, all of Florida, to eastern Louisiana. They prefer deep sandy soil for digging their burrows.

Gopher tortoises are herbivorous and forage on a mixed diet of grasses, the fruits and leaves of plants and shrubs, wildflowers, prickly pear cactus, and pine needles.

If not visible in the exhibit, look for him in his burrow.