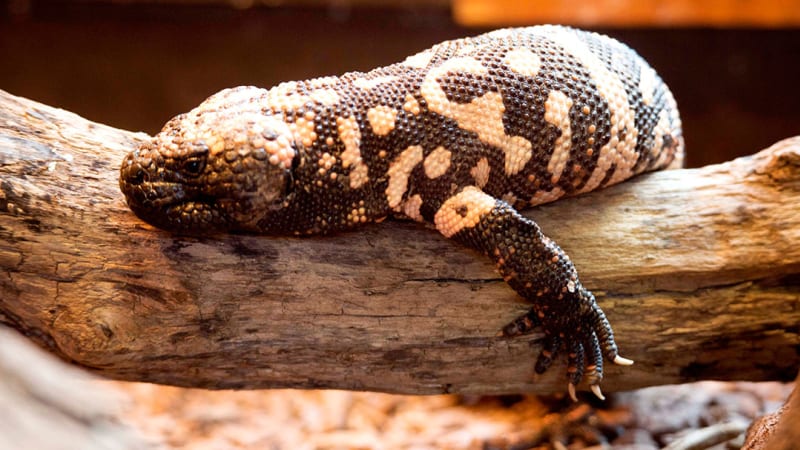 Of the 3,000 lizard species in the world, only the gila monster and the Mexican beaded lizard are venomous, and both inhabit similar geographic ranges. The gila monster eats eggs, young birds, small rodents and insects in the wild. The gila does not administer its venom through two hollow fangs like a rattlesnake does. The venom glands of a gila monster are located in the lower jaw. Ducts lead to openings close to the base of grooved teeth in the lower jaw. The opening and closing of the mouth causes the venom to discharge into the saliva, travel along the grooved teeth and into the intended victim. The longer the lizard holds on, the more severe is the venomous bite. They are notorious for their "bulldog-like" grip and reluctance to release a seized item. None of their prey is difficult to subdue and venom is probably rarely used to get food. It is generally believed that the venom is used for defense. Bites to people are usually the result of careless handling, and not the result of an aggressive attack, since these lizards are quite inoffensive and must be severely provoked to bite.Gila monsters have very thick cylindrical tails in which they generally maintain large fat reserves. The tail is not normally detachable and if it does break off, it will not regenerate. Their tongues are fleshy and deeply forked. While exploring, the gila monster flicks its tongue repeatedly, while it samples the air and substrate for information about the environment. Like most venomous animals, the gila monster has been relentlessly pursued by man. It is now protected by law in Arizona.

Three male Gila monsters are exhibited in the Lizard Community in the Great Southwest building.. One of the males, Dallas was born at the Columbus Zoo in 2003 and was transferred to the Dallas Zoo in 2006 where he lived for 6 years. He arrived at ZooAmerica in 2012 and can be identified by his small, stout body shape. The other 2 male Gila monsters, Bluto and Phil arrived at ZooAmerica from the Philadelphia Zoo in November 2019 and range in age from 28-34 years.

Gila monsters inhabit the dry desert scrub and foothills of the southwestern U.S. and northwestern Mexico.

Gila monsters specialize in locating and feeding on the eggs and nestlings of birds, rabbits, rodents, and reptiles. They can consume one-third of their body weight in a single meal.

These brightly colored, large lizards are usually easy to spot-whether under a heat lamp, looking out the window or hiding under a log.