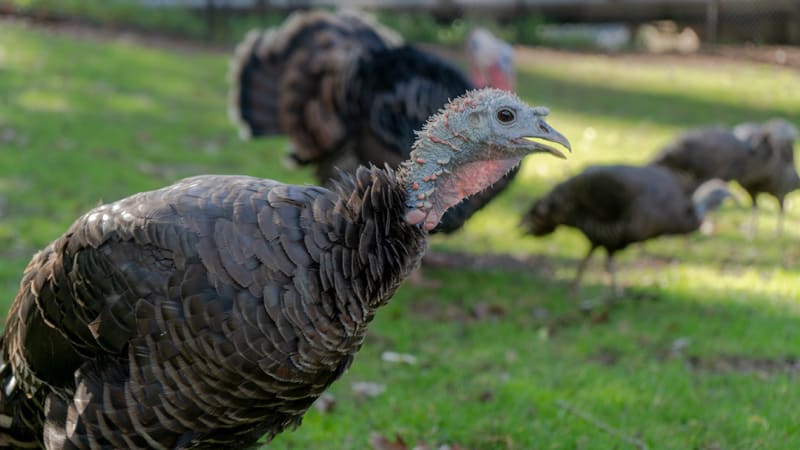 Benjamin Franklin considered our native wild turkey such a noble bird that he proposed it as the symbol of our new nation. Traveling in small flocks, turkeys scratch the forest floor for insects, nuts, plants and seeds. Wild turkeys use their keen eyesight and hearing to detect danger. The flock explodes when threatened by a predator, scattering to safety in all directions. In the spring, male gobblers court the hens using their brightly colored heads, and an exaggerated display of fanning their tails, strutting, gobbling, and hissing. In addition, the gobblers have magnificent metallic green, bronze and copper plumage, and a tuft of long coarse black hairs hanging from their chest, which is called a beard. Eggs are laid in a leaf-lined depression on the ground, and the young turkeys, or poults, are able to follow their mothers soon after hatching.By the early 1900s the eastern wild turkey was almost exterminated over much of its original range. Regrowth of logged areas, new laws promoting wildlife conservation, and the trapping and transfer of wild turkeys to suitable habitat have reestablished healthy populations. It is now found in the hardwood and mixed forests throughout much of the eastern United States and southern Canada.

We have five wild turkeys that live in a habitat with our white-tailed deer. There are two gobblers and three hens. All five hatched in May of 2016.

The eastern wild turkey inhabits the hardwood and mixed forests throughout much of the eastern United States and Canada. Usually found near some kind of oak. Preferred areas include a mixture of woodland and open clearings.

Our turkeys are usually visible in all parts of the habitat. They are well-camouflaged and sometimes blend in with their surroundings, so look closely if you can't find them at first glance.