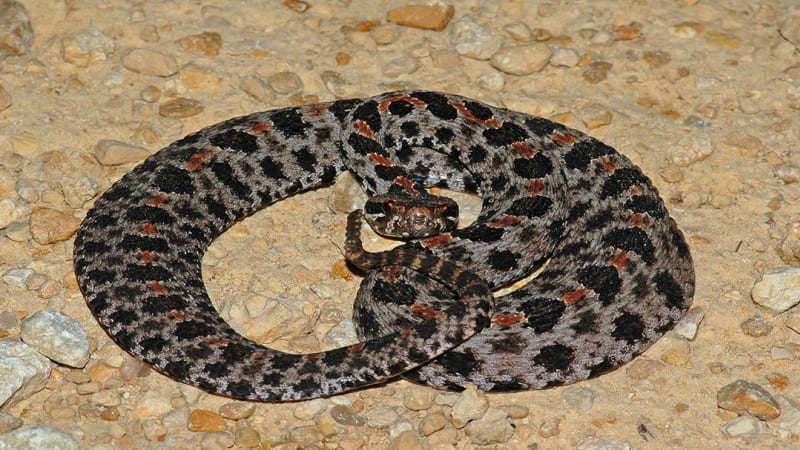 Like most pit vipers, a pygmy rattlesnake uses the sit and wait method of hunting. This snake has been observed in the same location for up to three weeks, patiently waiting for unsuspecting lizards, frogs, rodents, and insects. Also known as a ground rattler, the color and pattern of its scales blend in with the forest floor for excellent camouflage. When it does rattle, the sound is often mistaken for a buzzing insect and is difficult to hear. An adult pygmy rattlesnake is seldom more than 20 inches long. A female gives birth to live young in late summer or early fall. Pygmy rattlesnakes are among the most common venomous snakes in the southeastern United States. They are found in a variety of habitats, but prefer areas near creeks, ponds, marshes, and swamps.

Our pygmy rattlesnake was captive-born at the St. Augustine Alligator Farm in May 2014. Before coming to ZooAmerica in August of 2017, the snake lived at the Bronx Zoo.

Dusky pygmy rattlesnakes inhabit the southern Coastal Plain and are found in a variety of habitats from dry upland forests and sandhills to areas near creeks, ponds, marshes, and swamps.

Look closely as this rattlesnake can be very well camouflaged. You may see this snake blending with the substrate or climbing on the branches near the top of the habitat.