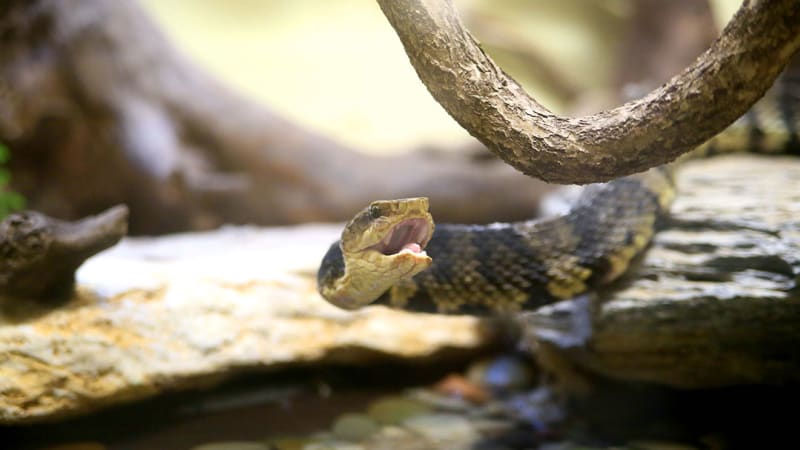 This venomous snake is named for the white lining of its mouth which flashes open in a defensive display when threatened. Often confused with harmless water snakes, the cottonmouth can be identified by its heavier body, thick, blocky head, vertical pupils, and the heat-sensing pits between the nostrils and each eye. Also called a water moccasin, a cottonmouth typically swims high in the water with most of its body above the surface. During the day, it basks on logs or rocks at the waters edge, and seldom climbs high in trees. At night, this semiaquatic pit viper patrols the edges of bayous and swamps in search of food, including fish, amphibians, small mammals, and even young alligators. Despite its aggressive reputation, the cottonmouth rarely bites unless stepped on or handled. Cottonmouths range throughout the southeastern United States, and as far north as Virginia. They can be found in many freshwater habitats, but are most common in cypress swamps, river floodplains, and heavily-vegetated wetlands.

Our cottonmouth, a female, arrived at ZooAmerica in 2017 from the Bronx Zoo. Her birth date is November of 2010.

Cottonmouths are found in many freshwater habitats throughout the southeastern United States, from southern Virginia into Florida and west into Texas. Contrary to popular belief, they are not found in Pennsylvania.

Usually always visible. However, it's well-camouflaged, so look closely among the rocks or in the water for this snake.