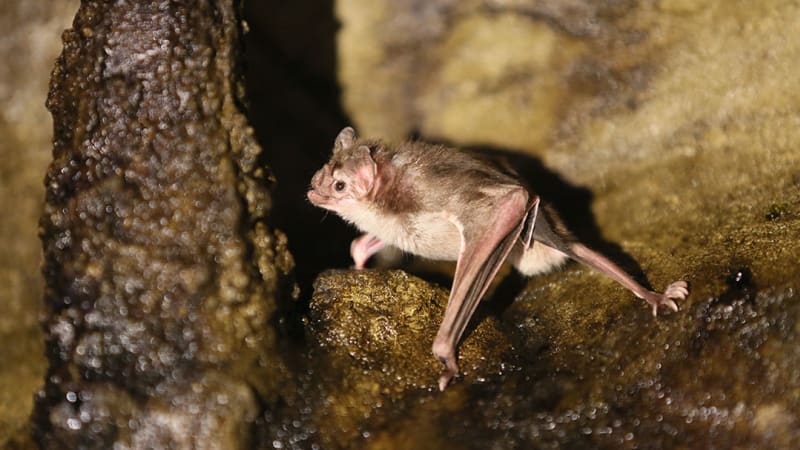 This nocturnal, flying mammal feeds exclusively on the blood of other animals. To eat the blood, the vampire bat is equipped with sharp incisor teeth that are used to nip a small piece of flesh. An anticoagulant in the vampire bat's saliva allows the blood to flow continually instead of clotting. The bat then laps the blood that flows from the wound with its grooved tongue. Vampire bats do not suck the blood from their prey. Each night, a vampire bat needs about two tablespoons of blood (20 grams), and cannot go for more than two nights without food. At one time, wild animals comprised most of the vampire bat's diet. With the increase in man and their cattle, this bat now feeds mainly on domestic animals, such as cows, pigs and horses. Some researchers believe that the vampire bat was a rarer species prior to the spread of the cattle industry.Due to their unique blood-feeding characteristic and the fact that they can spread many diseases, vampire bats have been widely regarded as pests and greatly feared. Various methods have been used to control the vampire bat populations, including the burning out of caves and hollow trees, and shooting and poisoning them. Unfortunately, these methods often kill many other beneficial and necessary species, such as fruit bats, nectar eating bats and insectivorous bats, all of which are extremely important to us.Vampire bats are not all bad, though. Research is being done on enzymes in vampire bat's saliva, and it is being used to develop a blood clot dissolving drug called Draculin. This drug may eventually help save the lives of stroke victims.Out of nearly 1,000 species of bats worldwide, there are only 3 species of vampire bats: the common vampire bat, the hairy-legged vampire bat and the white-winged vampire bat. The common vampire bat, which is exhibited at ZooAmerica, ranges from northern Mexico, south to central Chile, Argentina and Uruguay. Its body is 2 inches long, weighs 1 oz., and has a wingspan of about 8 inches. Vampire bats are primarily colony roosters, in caves and trees, and are considered to be altruistic in their care of one another. They will groom each other and will share regurgitated food with a roostmate who was not as fortunate in their nightly forage for food.

Our colony of 14 vampire bats solely survive on a diet of cow's blood. Each bat has a small microchip for identification, as we remove each bat 2-3x per year for weight checks and simple exams. Our original colony came from the Cincinnati Zoo in 1997, and then in 2008, we received additional bats from the Philadelphia Zoo.

Common vampire bats range from northern Mexico through Central America, and south into the South American countries of Chile, Argentina and Uruguay. Found in humid and arid climates, they occupy rainforests as well as deserts. They roost in caves, mines, tree hollows, and abandoned buildings.

They feed on the blood of mammals and birds. With the increase in man and their cattle, this bat now feeds mainly on domestic animals, such as cows, pigs and horses.

Allow your eyes to first adjust to the darkness. First, look by the blood bowls, then up to the ceiling. There is typically one large group in the center of the ceiling and several smaller groups to the right and left.