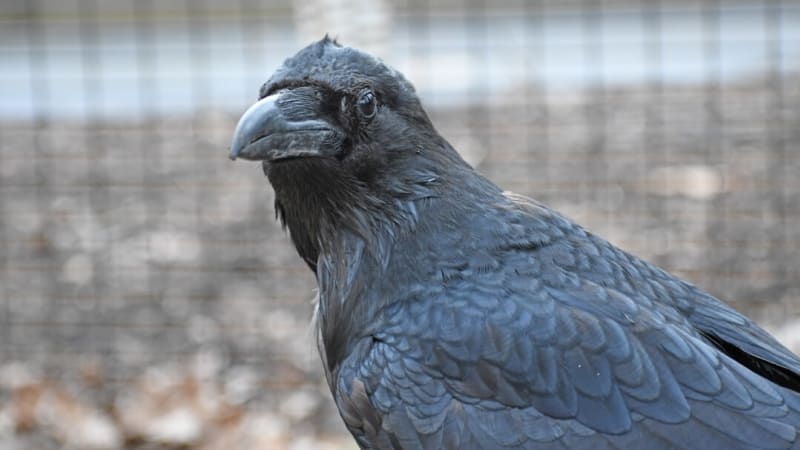 The common raven is the largest member of the corvid family. Although often mistaken for a crow, a raven differs in several ways. In flight, the raven has a long, wedge-shaped tail, not the shorter, squared-off tail of a crow. When perched, the raven's larger size, heavier bill and shaggy throat feathers are its most distinctive features. Crows and ravens are both extremely vocal, making and mimicking a wide variety of sounds. The typical "gronk" or "cr-r-ruck" of the raven is hoarser than the repetitive "caw" of the crow. Ravens are skillful fliers. They make steep dives and midair tumbles during their elaborate courtship flights. Ravens mate for life and the pair often soars with wingtips almost touching. Juveniles stay near their parents for two to three years, learning social and survival skills. Resourceful and crafty, ravens are considered to be one of the most intelligent of all birds.Ravens are birds of the wilderness, inhabiting many remote regions of the Northern Hemisphere. North American ravens range from Arctic Alaska, across most of Canada to Greenland, and throughout the western United States. In the east, ravens can be found in the Appalachians, including forested areas of Pennsylvania.

Our raven, Honey, is at least 25 years old. She arrived at ZooAmerica from a wildlife rehabilitation center in Arizona in 1997. She was originally on exhibit in the North Woods region of the zoo, where the American martens are now. She moved to the Education Department in 2008 when her exhibit was redesigned for the martens. The education staff works with her on a daily basis and offers multiple enrichment activities to keep her intelligent mind stimulated and engaged. In August of 2018, Honey moved into an exhibit in the Big Sky Country. We're excited to have her back on exhibit where our guests can enjoy her!

Honey is always visible. Look for her foraging on the ground or perched high in her habitat. She is often on her swing. Listen to her distinctive calls which can be heard throughout the zoo.