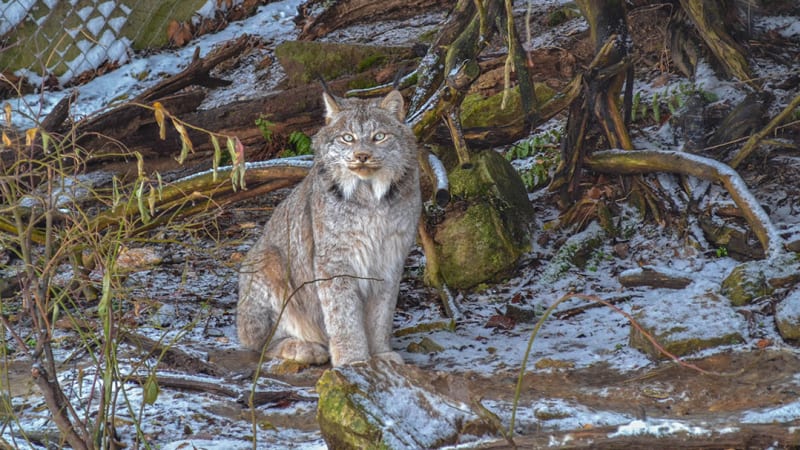 A Canada lynx is a medium-sized cat that is well adapted for life in the northern forests. Compared to the more common bobcat, a lynx is larger and has long black ear tufts, a black-tipped tail, and a flared facial ruff. With long legs and huge furry feet that act like snowshoes, a lynx can move tirelessly across deep snow while hunting its preferred prey, snowshoe hares. Lynx numbers rise and fall following the cyclic highs and lows of the snowshoe hare population. Ideal lynx habitat is a mixture of forest types. Downed logs and woody debris of old forests are needed for denning, escape, and protection from severe weather. The solitary lynx hunts in young forests that provide habitat for prey. Corridors of forest, with enough cover, allow the shy lynx to travel safely within its range. Canada lynx are found in the high elevations and mountainous regions of northern United States and Canada. Although their numbers are stable in Alaska and Canada, habitat destruction has led to a decline in the lynx population in the contiguous United States. The Canada lynx was listed as a threatened species, in the lower 48 states, under the Endangered Species Act in March of 2000.

ZooAmerica is home to five Canada Lynx. Woody, an adult male, was born May 15, 2005 at a facility in Minnesota and arrived at ZooAmerica in November 2007. He is very curious about new smells and likes to roll around on various enrichment scents that are offered to him. Wren, an adult female who was born at a facility in Montana in May of 2013, arrived at ZooAmerica from a wildlife center in East Aurora, New York, in September of 2019. Wren has given birth to two litters of kittens. Jack is from her first litter in April of 2020. Becca and Roxy were born in May of 2021.

Canada lynx are found in the high elevations and mountainous regions of northern United States and Canada. Their distribution mirrors that of its main prey, the snowshoe hare. They prefer 20- to 30-year-old mixed wood forests of spruce, fir, aspen, and birch.

The lynx can be well-camouflaged in their exhibit. Look to the left side of the exhibit, or in the center rear of the exhibit near the back wall. These are some of their favorite resting spots.