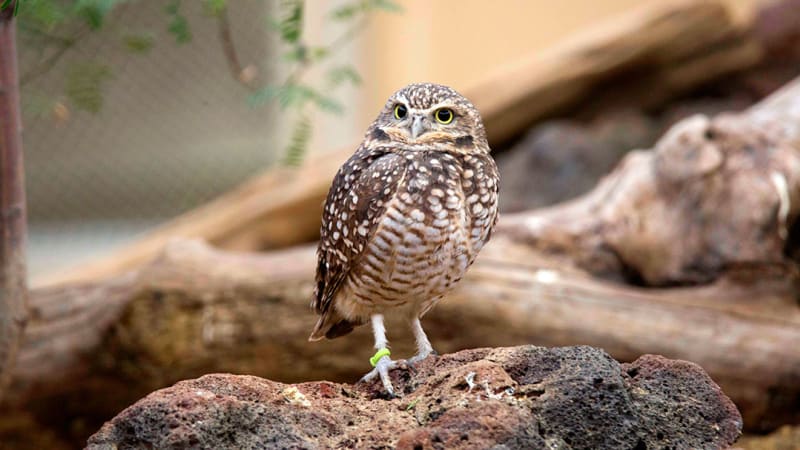 Unlike most owls, burrowing owls are active during the day. As their name implies, these small owls nest in abandoned prairie dog, tortoise and rodent burrows. Their nesting chamber is usually at the end of a tunnel, 5 ft. or more long, and is lined with grass, feathers and other materials. Both parents incubate the 6-11 eggs. The young spend most of their life underground, but emerge before they are fully fledged, to exercise their flight muscles. When disturbed in the burrow, the owls make a rattling hiss that mimics the buzzing sound of an irate rattlesnake. Possibly, this sound helps to scare off potential predators. A voracious feeder, this owl can eat its own weight in a day. Its diet consists of ground squirrels, snakes, lizards, birds and insects. In winter, some burrowing owls migrate to warmer climates.

We have three burrowing owls in the Great Southwest building. Carl, a male owl who hatched in May 2014, arrived at ZooAmerica in October 2016 from the Staten Island Zoo. He lives in the desert garden with 2 of his male offspring.

Burrowing owls are found on the grasslands and open areas of southern Canada, the western US, Florida, and south through Central and South America.

When hunting, a burrowing owl chases down grasshoppers and beetles on the ground, grabs large insects from the air, and will hover before swooping down on small rodents, birds, and reptiles.

Desert Garden exhibit: We have provided the burrowing owls with artificial burrows, but they are also able to dig their own. Look for them at the entrances to their tunnels. At times, they will perch on the large saguaro cactus or at other high spots throughout the garden.