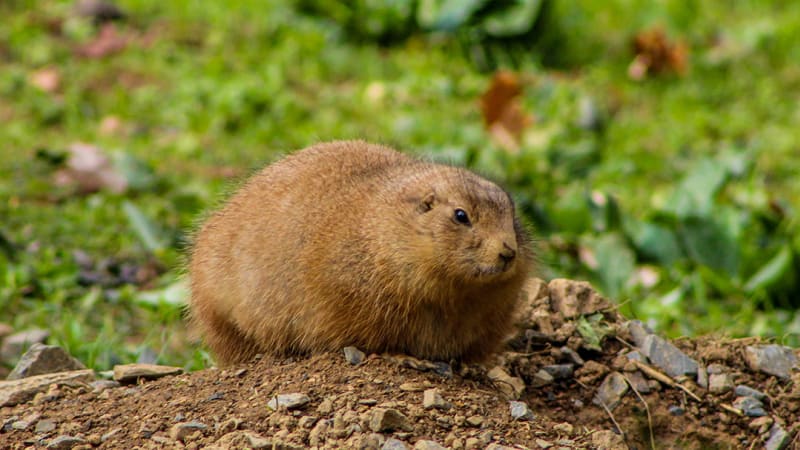 Although named for their barking alarm call, black-tailed prairie dogs are actually burrowing ground squirrels. Prairie dogs have a complex social structure and communicate by using special calls and postures. They live in colonies or "towns" that range in size from one to several thousand acres on heavily grazed, flat prairie lands, where they feed on grasses and forbs. A system of burrows connects several underground chambers, including sleeping, nursery and listening areas. Prairie dogs are very important to the prairie ecosystem. Their burrows provide critical habitat and shelter for a wide variety of species. Many predators, including hawks, eagles, coyotes, snakes, ferrets and badgers, depend upon them for prey. The black-tailed prairie dog is the most widely distributed of the five prairie dog species found in North America, and occupies the short- and mixed-grass prairie from southern Canada to northern Mexico. Habitat destruction, poisoning, unregulated hunting, and disease have eliminated prairie dogs from about 98 percent of their former range.

Our black-tailed prairie dogs live in a colony that varies in size from year to year. We currently have five prairie dogs and they were all born here at ZooAmerica.

Their burrows can be found throughout the exhibit, on the flat ground, as well as within the mound in the center of the exhibit. Black-tailed prairie dogs are active all year, but are rarely out during the night. During the hotter summer months, they might emerge only during the cooler hours of the day. Black-tailed prairie dogs do not hibernate, but when the weather is extremely cold or snowy, they might go into a deep sleep and stay in their burrows for a few days.