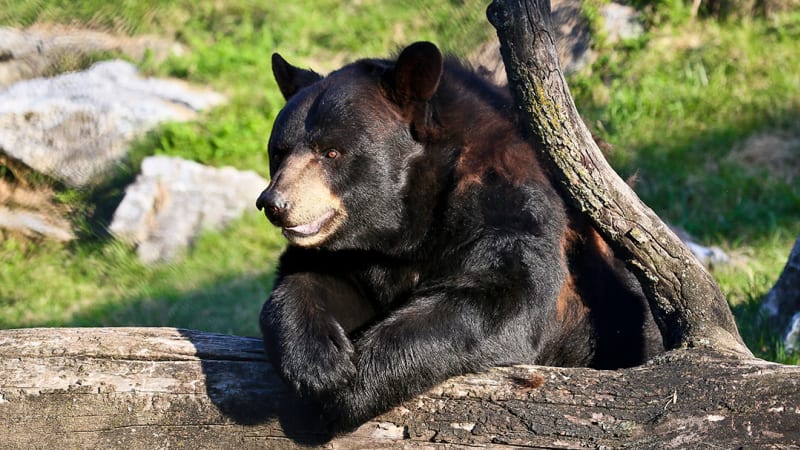 Of the three bear species that inhabit North America, the American black bear is the only one found exclusively on this continent. It relies upon its keen sense of smell to locate a variety of foods. The black bear's diet changes seasonally, and includes berries, acorns, beechnuts, skunk cabbage, grass and carrion. Favorite den sites for hibernation include rock cavities, hollow trees, excavation dens or ground nests. During hibernation, a black bear does not eat, drink, urinate or defecate, and will lose up to thirty percent of its body weight. Typically, two to three cubs, each weighing about 12 ounces, are born to a hibernating sow in January or early February.

Our two black bears have different stories. Chief, born January 2014, was found begging for food in Oregon as a yearling. He was likely a pet that was returned to the wild. Malnourished & small, he was taken to a wildlife rehabilitator, and then sent to us in June 2015. After given a nutritious diet and great animal care, he's now very healthy. Murphy was born January 2015. He was hand fed by a Montana family, very comfortable around humans, and couldn't safely live in the wild. He arrived in March 2016. Although he is a black bear, Murphy's fur is a light reddish brown - this color phase is known as cinnamon.

Black bears have a more diverse range than the brown or polar bears of North America, and can be found throughout the boreal forests of Alaska and Canada, the Rockies, the Appalachians in the east, and as far south as Florida and Mexico. Sometimes live close to people, especially in the northeast.

If not immediately visible, check the big tube in the exhibit. They often use it as a denning area. On warm days, they might be in the pool!