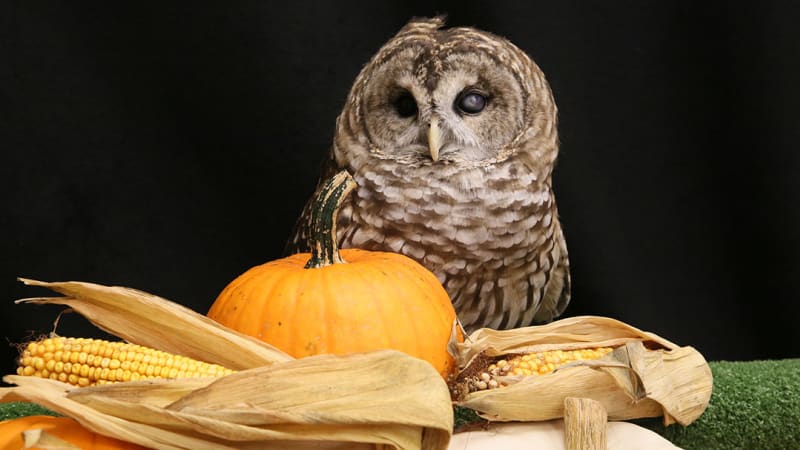 A barred owl is the second largest owl in Pennsylvania, surpassed only by the great horned owl in size. It is easily recognized by its stocky body, large dark brown eyes, and the puffy round head with no ear tufts. The horizontal bars on the throat and upper breast, and the vertical streaks on the belly give this owl its name. One of our most vocal owls, it cackles, caws, gurgles, trills and shrieks. Often called a hoot owl, a barred owl can be identified by its characteristic hoo-hoo-to-hoo, hoo-hoo-to-hoo-aww, in the rhythm of who cooks for you, who cooks for you all. The barred owl is an opportunistic hunter that preys upon a variety of small animals, including rodents, birds, frogs and crayfish. Keen vision and an excellent sense of hearing are used to locate prey. Like many owls, a barred owl has asymmetrical ears. Not only is one ear bigger than the other, they are also at different positions on the birds head. This adaptation enables an owl to pinpoint the exact location of prey by the minute differences in sound that the brain receives from each ear. A barred owl prefers wooded swamps and deep forests. Although it usually chooses a natural tree cavity for nesting, a barred owl will also use an abandoned nest of a red-shouldered hawk, crow or squirrel, as well as a manmade nest box. They are found all over the eastern United States, north into Canada and south into Florida and Texas. During the past several decades, barred owls have been slowly expanding their range into the Pacific Northwest, often overlapping with spotted owl habitat. The larger, more aggressive barred owl may displace the threatened spotted owl in its native old growth forest. Where territories overlap, barred owls out-compete the spotted owls for food and nest sites. Sometimes barred and spotted owls interbreed, producing hybrids of the two.

Our barred owl arrived from a wildlife rehabilitator in Virginia in May 2006. The owl had injured its wing out in the wild after it was struck by a car and was considered to be non-releaseable due to the severity of the injury. The owl's estimated hatch date is spring 2004.

Barred owls inhabit large, mature forests often near heavily wooded river bottoms and swamps. They are found all over the eastern United States, north into Canada and south into Florida and Texas.

Look carefully, as this beautiful owl may spend time in the high branches at the top of the exhibit or may choose to roost on branches part way up the tree. This owl can camouflage fairly well!