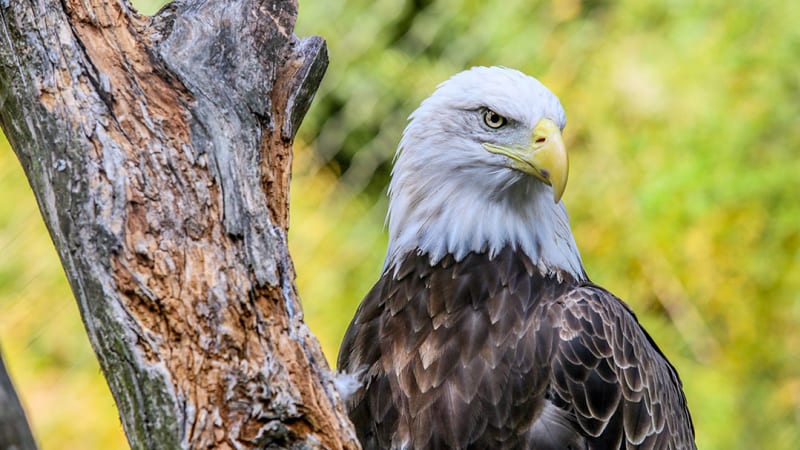 With its white head and tail, chocolate brown body, large yellow beak, and seven-foot wingspan, an adult bald eagle is unmistakable. Immature eagles take about five years to acquire this distinctive plumage. Bald eagles usually mate for life. Before the nesting season, the pair performs elaborate courtship flights, locking their talons, and diving and cartwheeling through the air. Nests are built near water in tall sturdy trees with a clear view of the surrounding area. The same nest is frequently used year after year, and can be over five feet in diameter and weigh up to 1,000 pounds. The female usually lays two eggs, but often only the older and stronger eaglet survives. Bald eagles use their powerful vision and vice-gripping talons to capture prey. Although primarily fish eaters, bald eagles also feed on waterfowl and small mammals. They often act as scavengers and will not hesitate to eat carrion and steal food from other animals. Bald eagles are a strictly North American species. After successfully recovering from an endangered status, bald eagles can be found in increasing numbers throughout the contiguous United States. They continue to be common in Alaska and Canada.

Our exhibit bald eagles are females. Both were injured in the wild and considered to be non-releasable. One eagle hatched in Tennessee in 2006. She was injured due to a gunshot wound and her right wing had to be partially amputated. The second eagle is from Florida and her hatch date is 2005. She was found with multiple injuries to her left wing, leg, and cere. She's also blind in her left eye. The cause of her injuries is unknown.

Bald eagles are fish-eating eagles. Herring, salmon, carp, and catfish are among the fish in their diet. They are opportunistic and will also eat birds, reptiles, mammals, amphibians, and invertebrates. They often act as scavengers and will feed on carrion or steal food from other animals.

Always visible. Both eagles often perch on the branches of the tree in the center of the exhibit.