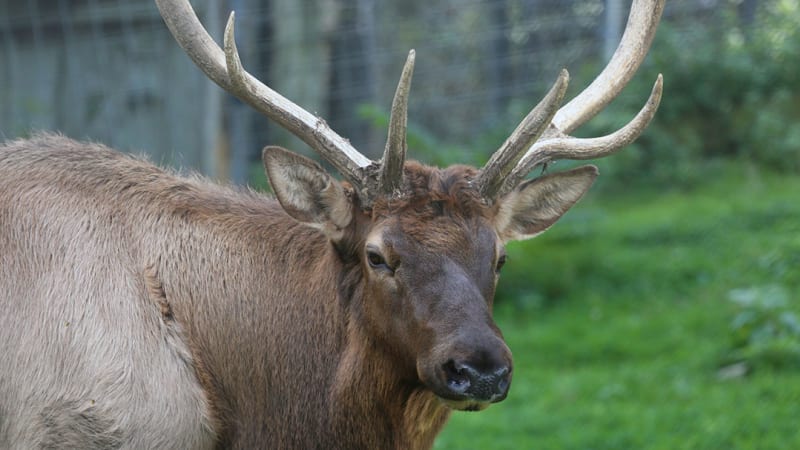 Elk are among the most vocal members of the deer family. Cows bark alarm signals, calves bleat and squeal, and bulls bugle. Bugling marks the beginning of the fall rutting, or breeding season, and advertises the bull's fitness to cows and rival bulls. During the rut, cows form small groups or harems that are controlled by a dominant bull. For the remainder of the year, cows, yearlings and calves form herds of 25 or more animals, while bulls form smaller bachelor herds. Living in a herd provides protection, for at least one elk will always have its head up, listening and watching for predators, including bears, mountain lions, wolves and coyotes. The animals were named elk by early settlers, after the European moose, or "elch." American elk are also called "wapiti," a Native American word referring to their characteristic light-colored rump. Once found throughout North America, large populations of elk are now found only in the western parts of the United States and Canada, and in scattered herds in the east. Elk living near the Rocky Mountains will often migrate to mountain meadows for the summer, and return to the lower foothills during winter. In the early 1900's, a trap and transfer program reestablished elk in Pennsylvania. The growing herd, now numbering over 1,000 elk, lives in the north-central counties of our state.

American elk are found in a variety of habitats, from alpine meadows, dry desert valleys, and coniferous swamps to hardwood forests. They avoid dense, unbroken forests. Elk living near the Rockies will often migrate to mountain meadows for the summer and return to the lower foothills during winter.

American elk are herbivores and their diet changes with the seasons. In the summer, they browse on grasses and forbes. During the winter, they feed on shrubs, tree bark and twigs.

During the summer months, the elk often choose to stand or lie down in the moat in front of their habitat. This area provides a cooler location and a sense of security. Elk are surprisingly nimble, and they can easily exit from either end of the moat at any time.