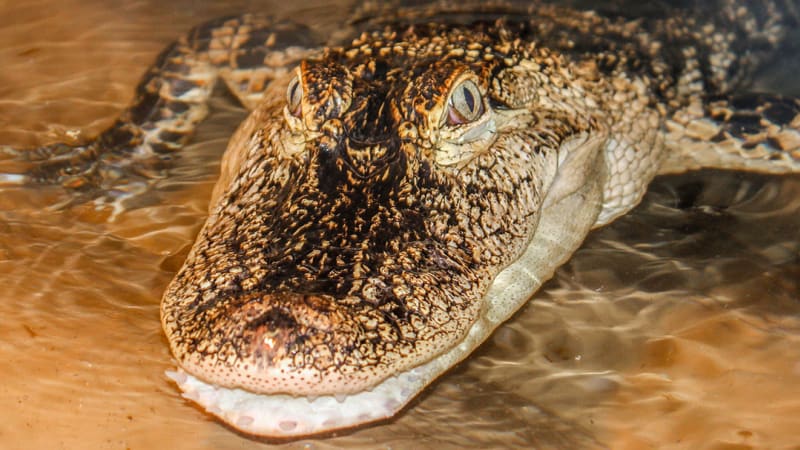 American alligators are important members of their ecosystem, and are regarded as keystone species. Many animals are affected by their existence. Young alligators are prey for wading birds, turtles, snakes, mammals, and larger alligators. Alligators over 4 feet long are at the top of their food chain. As top predators, they are important in controlling prey numbers. Using their tails and snouts to wallow out the muck and push out the vegetation, large alligators construct and maintain gator holes. During the dry season, these gator holes remain filled with water and create a refuge when the surrounding shallow water has dried up. These water holes are an important means of survival for many other Everglades animals. When the rains return, the animals spread out to repopulate the glades. Over hunting for their skins, combined with habitat changes, led to a serious decline in their population. In 1967, the American alligator was listed as an endangered species. After twenty years of federal protection, the alligator numbers made a successful recovery and is no longer considered an endangered species. Alligator nests are mounds of vegetation and mud and may rise 3.5 feet and be twice as wide. Females lay between 20 and 50 eggs, and will guard the nest throughout the incubation period. When the eggs are ready to hatch, calls from the hatchlings stimulate the mother to open the nest, freeing the young. Sometimes, she carries the hatchlings in her mouth to the water. The juveniles form groups called pods and remain close to the mother, deriving protection from her for up to a year. Despite her protection, the young are often food for other animals. Lacking the salt-secreting glands of the crocodiles, the American alligator can only withstand brackish water for short periods of time. They are able to tolerate colder temperatures than crocodiles.

ZooAmerica is home to one American alligator, Yoshi, that hatched in August 2010 at the St. Augustine Alligator Farm. He moved from the Education Department into the habitat area when he was about 3.5 feet long.

The American alligator inhabits freshwater swamps, marshes, rivers, lakes and canals. It can be found throughout the southeastern United States, from the coastal swamps of North and South Carolina, throughout Florida, and west to Texas.

Alligators are carnivorous. They consume fish, turtles, snakes, and small mammals. When young, they feed on insects, snails, small fish, and tadpoles.

Always visible. He is often in the water, but also basks on land.