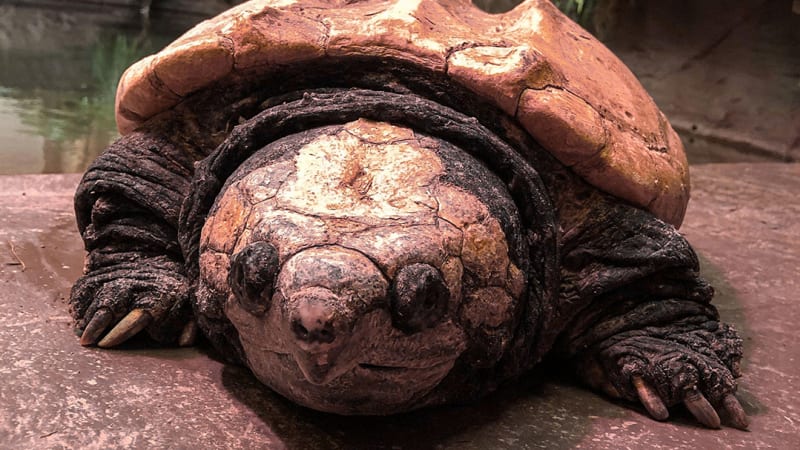 The alligator snapping turtle is the largest freshwater turtle in North America. Primitive in appearance, it can be recognized by its large, heavy head, and the three rows of spiky ridges along its massive shell. It is sometimes confused with the common snapping turtle, which is smaller in size with a much smoother shell. Well-camouflaged under water, this algae-covered turtle is both a scavenger and an active hunter. Lying in wait with its mouth open, it uses a pink worm-like lure on its tongue to entice fish. Frogs, crayfish, snakes, mollusks, plant material, smaller turtles, and alligators are also eaten. An alligator snapping turtle is highly aquatic, emerging from water only for nesting or occasional basking.

Our alligator snapping turtle came to ZooAmerica in 2021 from the St. Louis Zoo in Missouri. Her estimated hatch date is May of 2014. She was found in the River des Peres in St. Louis and was thought to be an intentionally released pet. She could not be returned to the wild.

Alligator snapping turtles inhabit lakes and slow-moving water within the river systems of the Gulf Coast states in the southern U.S. They are not found in Pennsylvania.

Their diet consists of fish, frogs, crayfish, snakes, mollusks, aquatic plants, water birds, smaller turtles, alligators, and carrion. They occasionally prey on aquatic rodents and other small mammals that attempt to swim or come to the water's edge.

Our alligator snapping turtle spends a lot of time in the water, either submerged or with her head just above the surface. She occasionally comes out to bask.